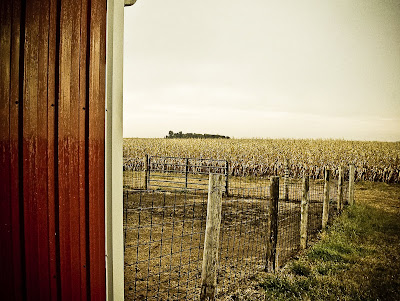 Great times in Laurens, IA and a lot more fun than I initially thought it would be. We stayed on our friends family farm and they could not have been more hospitable. Here are the farm highlights in bullet format for you all. Wedding stuff soon.

The Farm House. 600 acres of corn fields surround God's country. Absolutely beautiful and makes me wonder how I ever grew up as a big city boy in Miami. 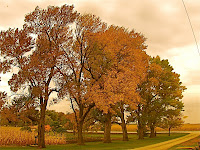 Great trees in the fall on the farm 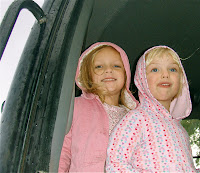 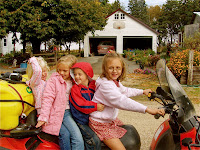 The four-wheeler. My kids happy, Lizzard not so much. You can't please everyone. 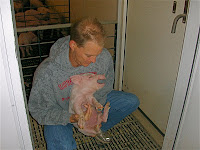 This is Marc. This is a pig. And I have never heard squealing like that in my life.

Every girl's crazy about.... 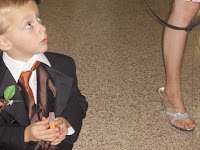 Drew diggin the tattoos!
Posted by Josh at 5:49 PM 1 comment: 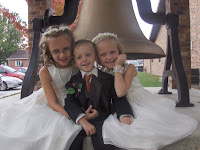 What a great weekend. The rumors I heard about this wedding were largely untrue, although it was still an interesting weekend to be sure. I'll start by debunking the myth that there were 350 people. More like 200. The BBQ pork was actually pretty good, although Caroline now has a rash and a fever. Here is the first of many pics to come. Good times had by all.
Posted by Josh at 12:27 PM 2 comments:

This could be interesting

This weekend we are headed up to Laurenes, Iowa (pronounced LA Renz) for our kids babysitters wedding. Apparantly, Laurens a.k.a. "The busiest little town in Iowa" has quite a history, and suprisingly a web site.
All three of my little dudes will be in the wedding. Drew as the dashing ring bearer, and Caroline and Bella as flower girls. I anticipate blog posts of this event to much to list in a single blog post, so I am planning on a 4-5 part series. Here's why:

The food at the wedding is going to be leftover bar-b-q beef sandwiches. They have been frozen since June when our babysitter's cousin graduated from highschool. There will also be potato salad that a lady in Laurens is making. Did I mention that there will be 350 people at the wedding? Yeah, that's a lot of mayonnaise for the masses if you ask me.

The flowers are plastic, but don't worry. They were spray painted to match the fall color scheme theme. I am hearing orange and brown which only makes me wonder how ridiculous Drew is going to look in an orange tux. I am presuming that its orange, plus it goes well with the Dumb and Dumber picture.

I'd get into more of it but it hasn't even happened. I'll be back Monday with evidence including photos and potential some YouTube videos that you will see here first. I am both frightened and elated all at the same time. Tom Arnold's show will have nothing on this shin-dig.

Tom if you're reading, bring a film crew to Laurens.
Posted by Josh at 5:30 PM 4 comments:

The story behind finding the picture of me on the phone

So I called my mom and told her to send me the picture that's in the previous blog post. She and Dad just moved and have all their photos in boxes. The idea of her finding this picture was a challenge. Another challenge was that she and my dad would have to figure out how to use the scanner even if they did find the picture. They had a scanner, they just hadn't used it. This is the equivalent of having a stove but eating your meat raw. They are somewhat technically challenged but they are gaining on it. I tried to talk them through it on the phone.

So I told my parents to try scanning any old picture just to see if they could accomplish that. If they could, and only if they could, they would look for the real picture. Below is the test version I received.

Now if you know my dad, this is pretty funny. If you don't know my dad, you're missing out. He drew characters like this all the time when we were kids. You could say he has his own style. That's me with with the purple Napoleon Dynamite hair and my mother in her maternity prime. So, the good news is that I got the real photo for a sappy sentimental post, and I got this little beauty as well. I am going to try to convince my sister to use it as her birth announcement but that conversation won't last too long.
Posted by Josh at 1:41 PM 1 comment: