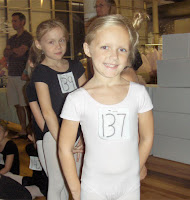 Last weekend, Caroline was one of about 150 5-6 year olds that tried out for the Des Moines Ballet's production of The Nutcracker. #137 spent an hour and a half learning a dance with the other kids and then had to perform on stage for the judges. She wasn't nervous, or scared. She just went about her business as she tried out for the role of "Mouse."

I'm not a big ballet guy but I am now. Yesterday we received a letter congratulating her! We were all very excited for her and are awaiting word on when she will be performing. We know it will be at the Hoyt Sherman Theatre during the first week of December as Caroline will be dressed in moue attire and doing something with a Sugar Plum Fairy. (I'm going to have to learn a little more about this whole thing.)

This is a pretty big deal for Caroline. She doesn't really have her own "thing" like her brother and sister. She is kind of schlepped around with the other kids quite often and doesn't really get her own time with mom or dad. The fact that she has something that is all her own will do wonders for her confidence. She's a great kid and feels like she has really accomplished something. Way to go Caroline!

G'ma and G'pa are so so proud of our little mouse- a pretty gutsy mouse!

YAY!! she HAS accomplished something. keep aunt whitney and uncle brooks posted!